We’ve been fighting the use of cages for animal products for decades. From fur farming to bear-bile extraction to egg production, these cages are generally designed to do one thing – make the most product as quickly and cheaply as possible.

“[s]ince 2008, markets for…chicken caging systems have been growing in Russia, the Middle East, and several Asian countries, including China. Cages are also used in Africa, India, and Eastern European countries.”

By Jonty Whittleton, Head of Campaigns on the international farming team

Behind the stainless steel mesh, the true cost is clear – confined animals living in bleak, often-crowded conditions with no way of behaving naturally.

And now, another worrying trend is looming – the use of cages to grow chickens for meat.

Over 60 billion chickens are farmed annually, with 40 billion of them factory farmed. Most of these intelligent beings spend their short, sorry lives in large, windowless warehouses, filled with tens of thousands of other chickens.

Conditions in these farms are bad enough (keep your eyes peeled as we’ll be exposing this issue soon) but the use of cages to grow chickens takes the suffering to another level. 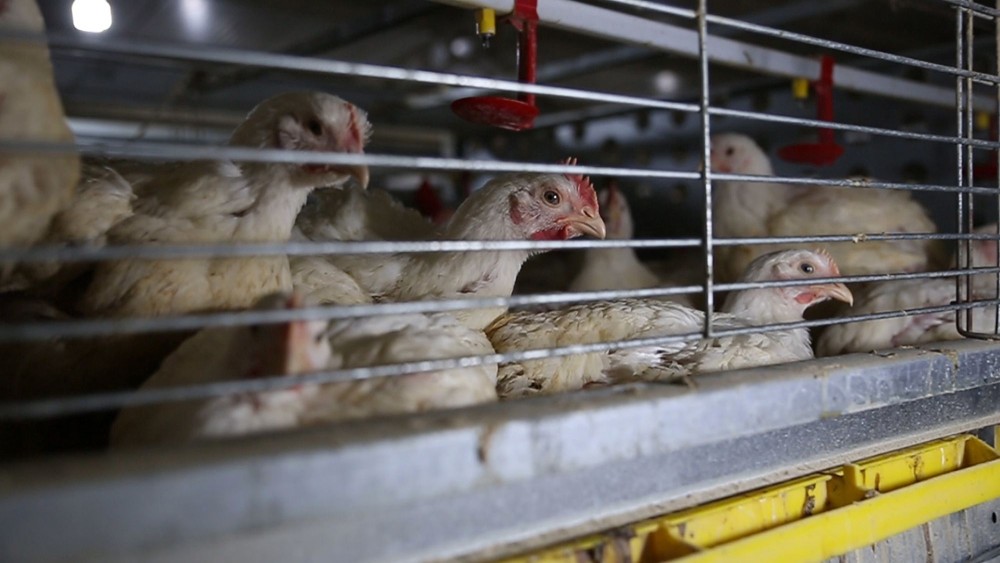 Another level of suffering

A typical farm features row upon row of stacked cages. It looks like a fully-stocked windowless supermarket where every product on the shelves is a living, breathing animal. Tens of chickens will live in the same cage, which, at their most crowded, provide two chickens with a space roughly equivalent in size to an A4 sheet of paper.

The barren cages are constructed from tough stainless steel mesh and offer a hard-plastic gridded floor – this means that the chickens have little to do, preventing them from behaving like they normally would.

The chickens’ waste is supposed to fall through the grids (this doesn’t always happen in reality), before being transported away by conveyor belts underneath. These same belts are then used to remove the chickens for slaughter after just six weeks or so, when they are still babies.

This short life span has been made possible through extreme genetic selection, forcing the chickens to endure rapid weight gain. In this sense, the chickens themselves are born to suffer, as this weight gain often leads to a host of painful physiological problems.

Related: Why do we emotionally disconnect from chickens?

The pinnacle of protein production

Science and technology have improved agriculture in many ways, but these cages represent the pinnacle of a misguided logic, where the focus on maximising protein and profit has trumped the welfare of the animals.

We’ve met farmers who genuinely believe that these systems are good for the animals, but this is sadly not the case. 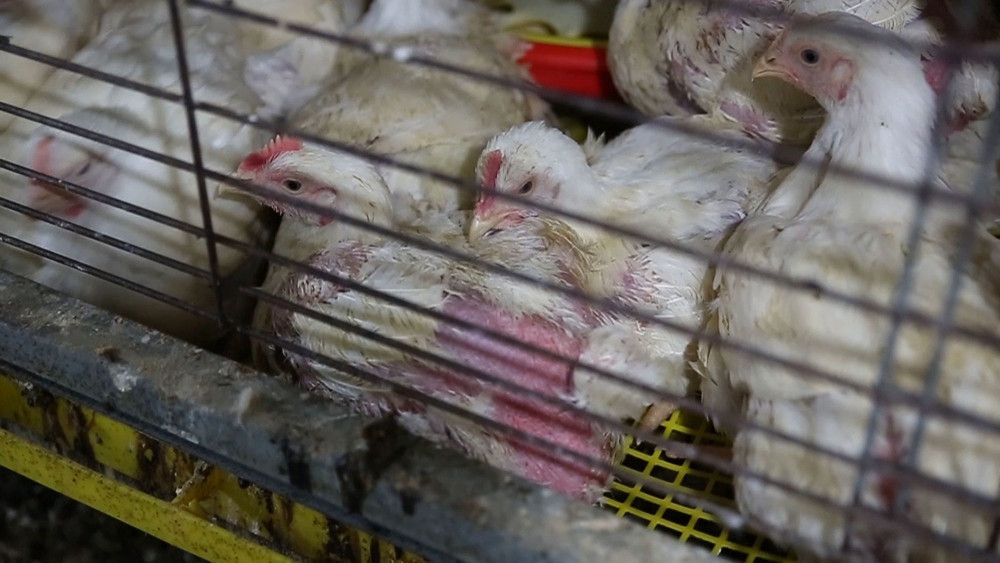 Thankfully, you won’t find caged-chicken meat on your plate everywhere, but the model appears to be thriving in other areas.

According to this journal article, for example, “[s]ince 2008, markets for…chicken caging systems have been growing in Russia, the Middle East, and several Asian countries, including China. Cages are also used in Africa, India, and Eastern European countries.”

No place in society

These chicken cages have been around for a few decades but it’s only in the last few years that they’ve started to grow in popularity.

A quick internet search reveals a wide range of companies offering up the latest in chicken-growing technology. Ironically, many of these companies are based in Europe, where the use of cages is prohibited. You’re greeted with glossy pictures of sparkling cages, often without any chickens in them, alongside bold claims that this is the future of chicken farming.

Next, learn about a day in the life of a chicken in a low welfare industrial farm

But is this really food production fit for the 21st century?

The use of cages to farm animals is a deeply flawed, unsavoury notion that shocks everyone I talk to about this issue. And don’t just take my word for it.

Over the last few years, some of the world’s largest food companies, including McDonald’s, Starbucks and Nestlé, have committed to move away from the use of cages for egg-laying hens.

These forward-thinking companies understand that their customers are looking for food options from kinder farming systems. 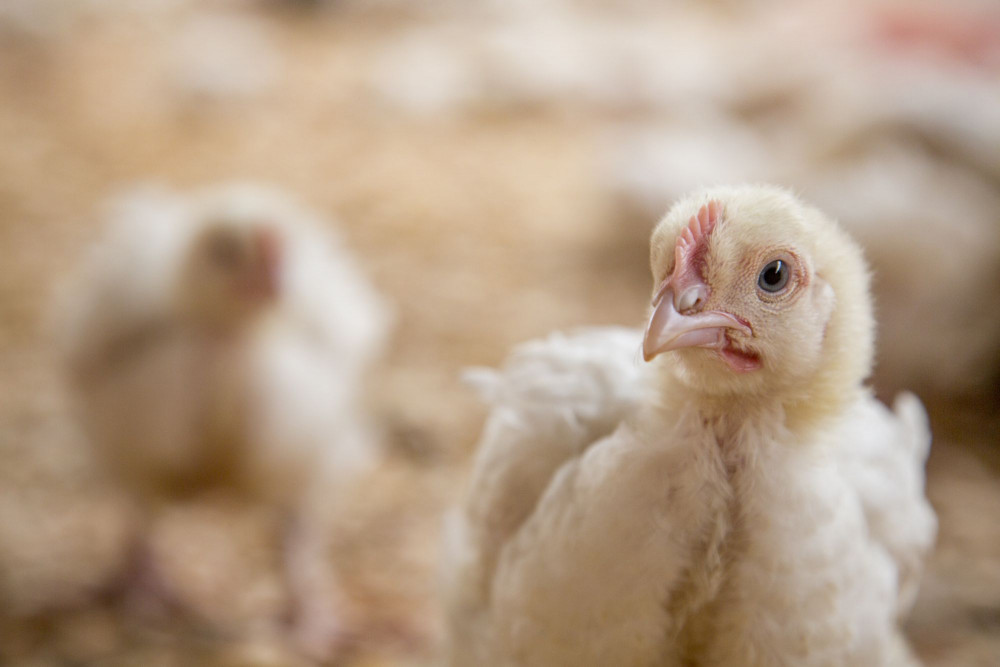 We want to see leading fast-food retailers take a leadership stance and pledge to keep caged-chicken meat off the menu. We’ve already made progress; in discussions with McDonald’s just last week, the company confirmed that they do not accept the use of cages to grow chickens. We’re thrilled to see a global fast-food retailer leading the way on chicken welfare, and hope this example will encourage other fast-food brands to do the same.

We’re now calling on KFC, Nando’s, Starbucks, Burger King, Pizza Hut, Dominos and Subway to make the same commitment. And this is where you come in – sign our petition and join the call for them to go cage-free for chickens.

Working together we can drive change for chickens raised for meat, just as we’ve done for egg-laying hens. 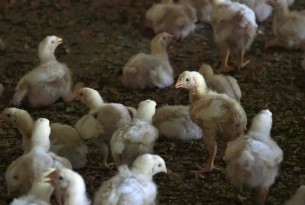 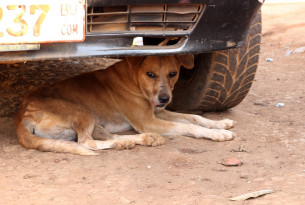