“Pigs are playful, social and intelligent beings,” said Ben Williamson, Programs Director, World Animal Protection. “An isolated life in a cage, is a life of cruelty and it must end."

On June 5, World Animal Protection staff and volunteers traveled to Northwest Arkansas to engage Walmart stockholders and company executives about the conditions many mother pigs experience on factory farms, including cruel, continuous confinement.

Roughly 3 out of 4 mother pigs are isolated and confined in small cages called gestation crates, unable to move around freely, turn around, or even lie down with their limbs fully extended. As the world’s largest retailer, Walmart can help end this cruelty by only sourcing pork from producers committed to ending the cruel confinement of pigs. 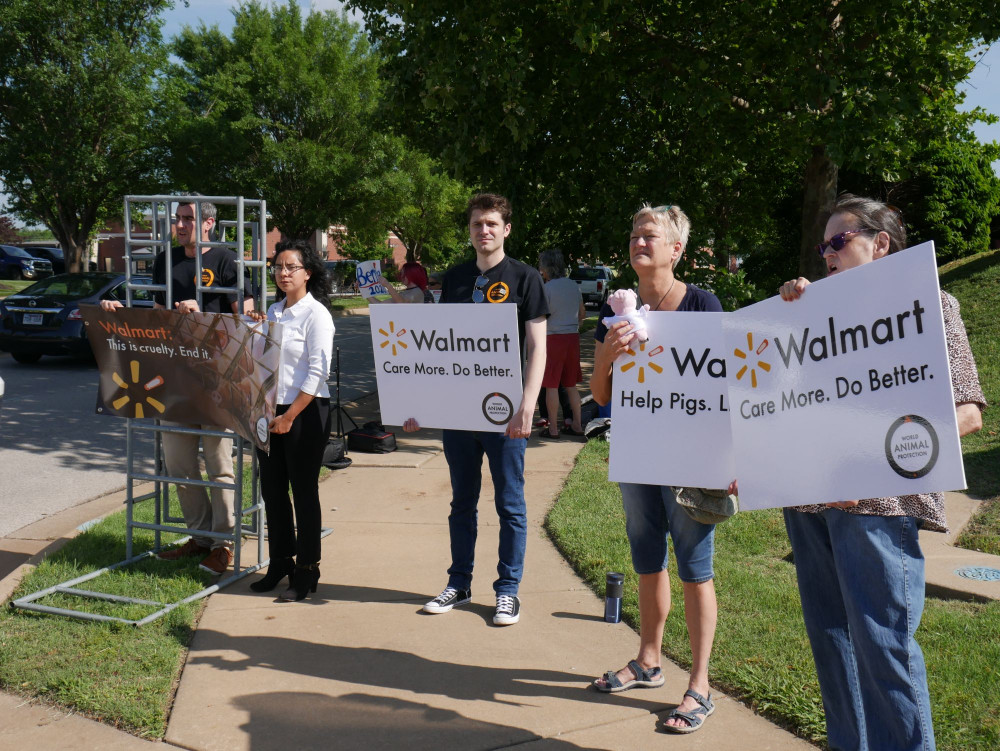 As shareholders and retail business leaders began to arrive, they had an opportunity to view and experience the cruel confinement of mother pigs with a human-size gestation crate. We explained how failing to institute a ban on gestation crates is a threat to Walmart’s business, and that Walmart stores around the world should set a clear timeline to shift 100% of its pork supply from gestation crates to group housing for mother pigs.

According to research we commissioned, nearly nine out of 10 (88%) of Walmart customers surveyed agree that supermarkets have a responsibility to ensure pigs are treated well. Many Walmart competitors—Costco, Kroger, Target, Albertson’s—have all made some commitment to stop confining pregnant sows in cages.

“Pigs are playful, social and intelligent beings,” said Ben Williamson, Programs Director, World Animal Protection. “An isolated life in a cage, is a life of cruelty and it must end. Our supporters and many of the people we spoke with in Arkansas recognize that eliminating gestation crates from their supply line would not only benefit mother pigs, but it will also benefit Walmart’s consumer sentiment.” 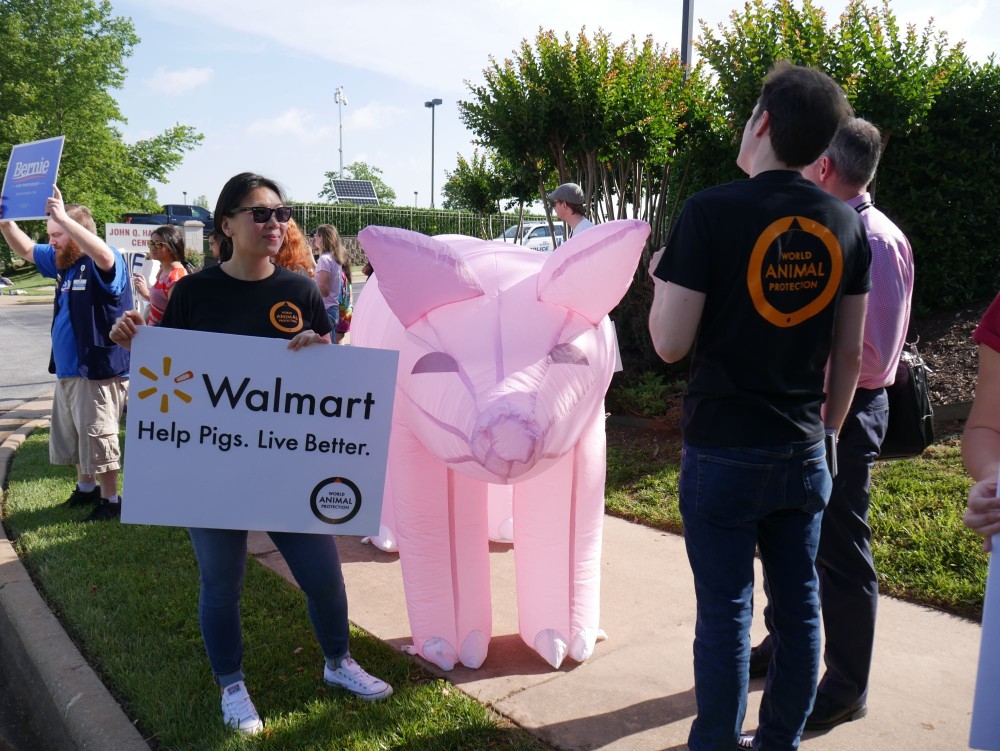 This demonstration in Arkansas was part of a multi-country effort with other actions taking place here in Canada, Brazil and Mexico before bringing the concerns of Walmart customers to the Annual General Meeting.

Pigs are amongst the most intensively farmed animals on the planet, often suffering at every stage of their lives. Pork is big business and supermarkets spend millions of dollars each year sourcing pork from producers around the world – supermarkets have the power to end the cruel suffering of pigs.

Large retailers like Walmart have the power to eliminate gestation crates. In fact, 78% of Walmart customers would be more inclined to shop at a major supermarket that is committed to phasing out cages. 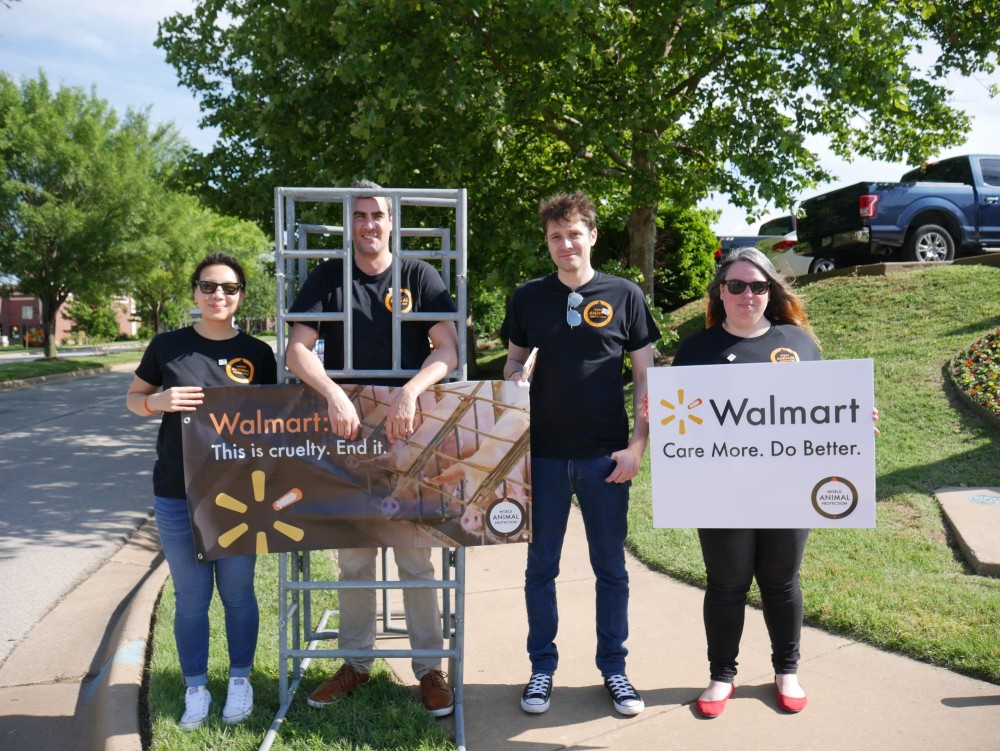 We are asking consumers to help eliminate the cruel confinement of mother pigs by telling Walmart to publicly commit to sourcing fresh pork only from suppliers that do not keep mother pigs in cages.

There are several ways you can act to protect pigs: 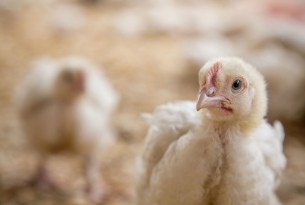 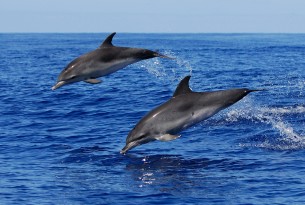 Why you shouldn’t share that cute pet otter video 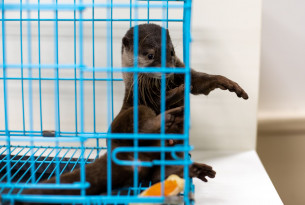