How can I help this Earth Day? | World Animal Protection Skip to main content

How can I help this Earth Day?

Five easy ways to help Mother Nature from your home

Stuck inside and not sure how you can participate in this year’s Earth Day? You’re not alone. This year marks the 50th anniversary of Earth Day, but because of COVID-19, all in-person events have either been canceled or transitioned online. While you can’t join a rally or a beach cleanup, there are still individual actions you can take to make a difference.

99% of animals raised for food in the United States live on factory farms. These intensive animal agricultural facilities seek to maximize productivity and profit while minimizing costs. As a result, they produce large amounts of waste that drain into our water supply, increase levels of soil and air pollution as well as contribute to deforestation.

By reducing your meat intake and shifting to more plant-based foods, World Animal Protection expects factory farming to phase out, which in turn will result in a healthier planet. What’s more, eating less meat also means fewer animals suffering on factory farms, the largest source of animal cruelty in the world.

Staying at home means you may have extra time to read and binge shows on Netflix, like What the Health, Forks Over Knives, or The Game Changers. Take this time to boost your knowledge of animal welfare, the environment, climate change, and anything else that sparks your interest.

By purchasing higher-welfare meat and other animal products, you’ll be sending a strong message to the industry and retailers that you value animal welfare and the environment. You see, when small-scale farms commit to raising their animals using high-welfare practices—such as eliminating cages or reducing stocking density—they’re not only improving the lives of farmed animals, but they’re also reducing their environmental impact. As the market for higher-welfare meat grows, the industry will shift in response to this demand, thus improving the lives of billions of farmed animals and safeguarding our planet.

While you might not initially think of animal welfare as an environmental issue, the fact is when we prioritize animal protection, we’re also helping to safeguard the natural world. This means by reducing meat consumption and improving the lives of farmed animals, we’re also helping the planet. But we can’t do this vital work without the support of compassionate people like you. Help World Animal Protection continue its mission to move the world for animals by making a generous online gift this Earth Day.

Celebrate the 50th anniversary of Earth Day by joining the global movement of people who are committed to creating a more sustainable and kinder future by pledging to #EatLessMeat today!

The elephants’ guide to social distancing 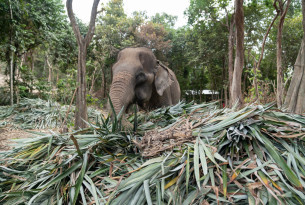 Right now, the best thing we can do as individuals during this pandemic is stay home as much as possible. Here are some social distancing tips from elephants 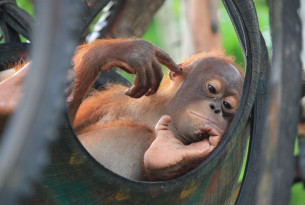 While some of us are finding it hard to adapt to social distancing and self-isolation, some animals like the solo life