A day in the life of a poached parrot

African grey parrots are the most popular wild bird kept as a pet in Europe, USA and the Middle East. But their journey to become pets is one of unimaginable suffering.

This is the beginning of her long, frightening and hazardous journey towards becoming a pet thousands of miles away from her forest, nest, mate and community.

Up to 21% of the wild population of African prey parrots are poached every year to supply the global illegal wildlife trade.

Life in the wild

The wild parrot wakes up high up in a tree in the lush lowland forests of Cameroon. Her lifelong mate begins to groom her feathers in a display that reinforces their bond of trust. In their tree and those nearby, African grey parrots are stirring in their large social group.

Taking to the wing, the parrots circle swooping and calling whilst more and more join them to set off for a day of foraging. Together the birds will fly distances of up to 9-16 kilometers! In the wet season they will keep to the tree tops to collect fruits, nuts, seeds and berries, and in the dry season they will land in forest clearings to seek out food. Unfortunately, poachers have built traps for both situations.

The moment of capture

In the dry season, large nets are placed on the ground with lure birds tied to them to get the attention of the parrots flying high above.

In the wet season, a lure bird is tied to a broom handle and placed among branches at the top of the tree that are covered in glue. He is hit repeatedly by the poacher causing him to call out to get the attention of the parrots flying above. The wild parrot hears the cries from the lure bird and flies down to explore.

Landing on a nearby branch the wild parrot becomes stuck in the glue-like substance. She tries to fly away but her feet are stuck. She squawks, struggles, fights to get free but it doesn’t work. A noose is looped over her head and she is yanked hard by the neck, which tears her feet from the glue causing searing pain. She tumbles down through the leaves, her body lashed by the branches, to land on the ground.

Before she is able to escape large hands grab hold of her and squeeze. Her cries pierce the forest as she struggles to escape but it’s of no use. The poacher uses a machete to roughly chop off her flight feathers meaning she will not fly again for a long time. Immobile, in pain and fear she is thrown into a small box. The lid closes and everything goes dark.

The wild parrot is trapped, helpless and distressed in a small wooden box. She is bumped and thrown from side to side as the poacher treks back through the forest. This is the beginning of her long, frightening and hazardous journey towards becoming a pet thousands of miles away from her forest, nest, mate and community.

The bumping and banging of the box stops temporarily but is then replaced with the deafening sound of a motorcycle engine roaring. When the bike screeches off, she is flung around her box once again. She flaps and flails, calling out but she is drowned by the engine and starts to grow weaker as the journey continues.

Eventually, the terrifying noise stops and the wild parrot is taken from the back of the motorcycle and carried into the farm that the poachers and exporters use as a holding centre. She is roughly grabbed and thrown from her box into a small crate 40cm by 60cm which is crammed with another 30 other parrots squawking and flapping trying to escape.

The crate smells foul, and its floor is thickly covered with bird faeces. A farmer at the holding centre throws a small handful of cheap bird seed into the crate. The wild parrot’s energy is waning and she is hungry. She scrambles to retrieve some food from the squalid floor. The other birds do the same and a desperate feeding frenzy ensues. The little seed that she manages to eat is very different to the food she used to forage in the wild and it will lead to digestive problems and calcium deficiency over the coming days, if she is able to survive the upcoming plane journey.

After being shipped by plane to the Middle East, the wild parrot is weak and distressed. It has been a long journey rammed into a small, hot crate. The plastic windows of the crate she travelled in are tinted green so that officials looking in would believe the parrots inside are green, thus not protected by wildlife trade laws.

Many of the parrots died in the cage on the journey. Some from exhaustion and poor diet, others suffocated and many had diseases that caught hold in the poor conditions and rapidly spread. Their bodies were left in the cage for the days the journey took, spreading further disease and infection. She was one of the few that survived, though barely.

We know people often purchase exotic pets because they’re animal lovers. Animals bring joy to our lives, so it’s understandable that we’d want them to be part of our home. Many exotic pet owners, however, are unaware of the daily suffering their animals endure.

We encourage everyone to appreciate and respect wild animals where they belong – in the wild. We should only share our homes with domesticated animals who’ve evolved over thousands of years to be our companions, and whose needs can be completely met as pets.

Add your voice today and pledge not to buy or breed a wild animal as an exotic pet. 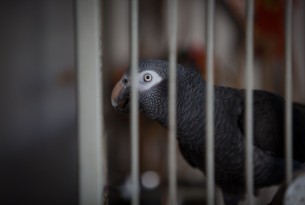 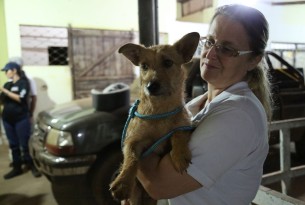